You never know what you’re getting into when you fall in love, but that doesn’t mean you avoid the jump.

My synopsis: The Sands’ business, Windy City Magic, is in magic. The business of Amber Sand, in particular, is to see other people’s “the one” as a matchmaker. While she is surrounded with other people’s romantic certainties, the Fates have doomed her to the fate of not knowing her own. Charlie Blitz, the mayor’s son and the reclusive campus crush, enlists her help and Amber finds herself falling for him even though he’s certainly not her business – whenever she looks into his eyes, she sees “the one” for him and it’s most definitely not Amber.

Published in May 2017 by Disney-Hyperion 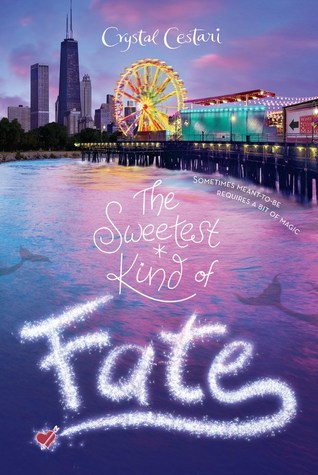 I had so much fun reading The Best Kind of Magic. It’s funny and different and hard to put down. Set in Chicago (which I’ve never been to), I love discovering places such as The Gold Coast, Wicker Park, and Navy Pier – all through reading this book! I can just imagine how beautiful Navy Pier is at night when it’s mostly quiet but you can still see the reflection of the lights on Lake Michigan.

Maybe  there’s no scientific evidence of desserts curing what ails you, but if you ask me, the jury’s still out on science anyway.

Amber Sand is easily likable – she is sassy, spunky, fun, and she loves to bake! She reminded me of a combination of Blue Sargent from The Raven Cycle series by Maggie Stiefvater and Lara Jean from To All The Boys I’ve Loved Before series by Jenny Han.

I started reading this late last year. I saw someone posted about it on Instagram so the next time I went to the bookstore I grabbed it off the shelf and started reading it. I was a couple of chapters in and was already hooked but I managed to convince myself not to buy it.

A few weeks later, I started reading The Raven Cycle and I remember for the first few seconds, I was mixing the two up. Blue and Amber have such similar backgrounds and surrounding circumstances – magical deficiencies, magical business, secret prophecies, forbidden love – that while reading The Best Kind of Magic, I still found myself comparing the two. Even so, the differences were still enough to differentiate between.

The only thing that really reminded me of Lara Jean is Amber’s passion for baking and how she uses it to immerse herself and forget about everything else. Reading does this for me and I love that without going outside, I find an escape. Sometimes, though, it can be crippling because I find myself running away and hiding too often.

Anyway… back to the book.

Where does anyone come from? We’re all just individuals trying to get through our days.

The concept of supernaturals living like ordinary humans in the real-world was a refreshing concept for me. I like that they just blended in, suggesting that sometimes you can be interacting with one and you won’t think twice about it (that charismatic, beautiful classmate you have – maybe she’s a siren, after all!) Who knows maybe we’re all just like Charlie, living blindly in a world where everyone seems to be normal until we find out that nobody is, nothing is.

The merging of two lives, the threshold of possibility: it’s an energy unlike anything else.

L.O.V.E. I can never get enough of. There are so many facets of love that hasn’t been explored, that we might not know about, and it’s always an amazing experience for me to read a book with love as its main theme. And always, always, always, I am left with more questions than answers. But alas! Love will always remain a mystery – a powerful force beyond definition. The best kind of magic.

It’s kind of hard to properly work up a full-blown crush when you know you’ll never be the endgame*.

What makes the romance in this novel unique and extremely interesting is the question it brings up: what if you can see yourself with someone and they can see themselves with you, but yet you know they’re going to end up with someone else? Even in this day and age when all it takes to connect with someone is a click of a button away, it’s hard to put yourself out there and face that risk of rejection. But can you imagine, how much worse and how much more difficult it would be if you thought you knew how it would end? If you knew the end, would you still choose to go through a particular middle?

This got me thinking about endings and how the final moments of a story can color our entire perception of a narrative. But endings aren’t the epitome of a story; they are just how it stops. The real story is the middle: the ups and downs, the lefts and rights. There are so many directions a story can go, and it’s that meaty middle that gives us insight in what is truly going on.

Overall, as you probably can tell, I was really taken in with The Best Kind of Magic. The characters developed well and they live in a slightly more interesting version of Chicago. The sequel will be out soon, but even so, I think that it also works as a standalone. If you’re looking for a light, funny read with unexpected insights on life and love, I highly recommend it!

Do you believe in predetermined fate? Do you believe in “the one” ? If you were given the chance to see the future, would you take it and do you think it will help you make better decisions today?

And if you survive all that, thank you!